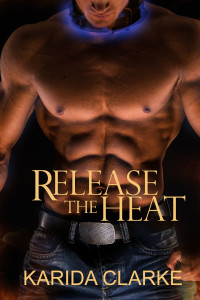 Phoenix Warrior Titus has always enjoyed his duties safeguarding Australia and Antarctica. He’s found fulfillment fighting rogue demons and vampires and surfing during his downtime. Until now. Finding interested women isn’t a problem, but he’s looking for something more. As his fellow Warriors bond with their mates, Titus is experiencing an unusual emotion. Jealousy.

Gabriella Vasquez has her hands full working in a vet clinic, volunteering at an animal shelter, and taking college classes. The one thing she doesn’t have time for is a social life. Her best friend, Rebecca, has mated the leader of the Phoenix Warriors and Gabby is on her own.

When Gabriella’s safety is threatened and Titus is assigned to protect her, the sparks fly. But will the spark of their desire endure the trials of the arena and a royal secret? 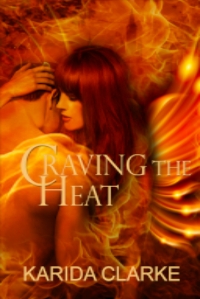 Yelena, the only female Phoenix Warrior, is struggling to secure her territory as the human realm is being overrun by rogue vampires. She’s always been one of the best and she knows she can handle it. During an encounter with rogues, though, she is captured and sold into slavery.

Vincent, the new vampire king, is at the slave market hunting for a bride with powerful blood. Only then will his magic be strengthened enough to save his people.

Can the two work together to prevent a war in one realm and destruction in another? And can they resist one another long enough to get the job done…or should they even try? 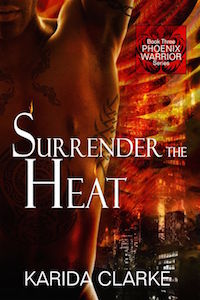 Phoenix Warrior Ryker is intense, brooding, and insanely hot, but after the murder of his flame bond, he’s also missing a part of his soul.

Still bent on demon vengeance, Ryker saved a witch from a group of demons months back, but little did he know she wasn’t the victim. After defeating her attempts to take over the human realm, he now seeks her recapture at all costs.

Zhiane, a fierce demon bounty huntress with death and loss in her past as well, is close to achieving her ultimate goal and then settling into retirement. Zhiane strikes a deal with Ryker–in exchange for a few favors, Ryker will have his witch. But when the tasks are completed, neither is sure what the true prize is… 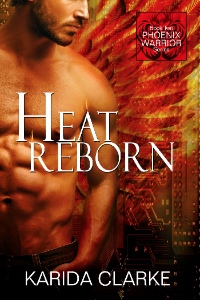 Samuel, a Phoenix Warrior who monitors otherworldly interactions in the human realm, is eager to return to business as usual after his recent rebirth. Immersing himself in technology has always been enough before, but something seems to be missing now.

Hadia, a young Mauritanian woman, was rescued from a life of enslavement by her mentor, the Desert Witch. Together, the women have the task of guarding the Eye of the Sahara, a portal to other realms. When the portal begins showing signs of failing, the Desert Witch sends Hadia on a search for help.

Hadia has met Phoenix Warriors before, but nothing could have prepared her for Samuel and the threat he may pose to her freedom. Samuel communicates better with computers than people, but his desire for Hadia makes him uncertain whether to trust logic or instinct.

Can they restore the portal before the realm is overrun by evil? Or will their feelings compromise the safety of all humanity? 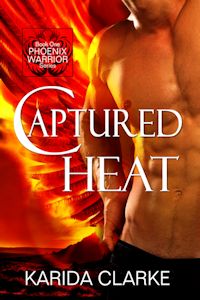 The Phoenix Warriors, a group of immortals bound by the gods to protect the integrity of the human realm from otherworldly races, have been led for centuries by Cole, a guarded alpha male.

When Cole learns that an ancient demon has discovered the location of a tool that will enable him to escape from the prison realm, Cole vows to find and safeguard it before the demon’s vampire minions.

Rebecca Powell is a high school guidance counselor who is everyone’s “lucky charm.” She’s just not so lucky herself. After being used a time too many, she’s through with men… until she runs right into the one she can’t resist.

Cole and Rebecca have both been burned before, but can they put aside their misgivings to protect the human realm and learn to love again? 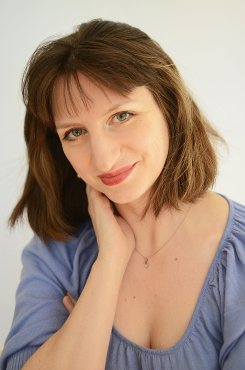 Karida Clarke is a romance writer with a penchant for anything otherworldly. If it has scales, fur, poisoned talons, throws fire or casts magic spells, it might find its way into her stories. Karida likes her heroines multifaceted and her males swoon-worthy, Alpha-style. She believes that relationships matter more than things and places. In her free time, Karida enjoys lacing up for long runs and cooking ethnic cuisine. Pet peeves include Saran Wrap and people who don’t put their shopping carts away. She lives with her nerd-tastic husband and two spunky kids in Ohio.